In the remote areas of Thailand, schools often face Internet connectivity issues. Quality of educational process depends on continuous and bidirectional communication. Without connectivity and communication, the learning approach reverts to the old model of independent study, in which the students becomes autonomous and isolated, and tends to drops out.

Various projects have been developed in order to expand and enhance the education in the Thai countryside but given the low reach of Internet coverage in the country, state-of-the-art projects based on Internet infrastructure are difficult to deploy. As a result, interaction is achieved by broadcast e.g. satellite TV, used in combination with feedback via telephone or fax.

Since 1995, the “One Class One Channel Live Broadcast: Grade 1 to Grade 12” has broadcasted via Ku band, on THAICOM 5 direct to home, from His Majesty the King’s private school Wang Klai Kangwon in Hua Hin, 200 kilometers south of Bangkok. Today, 30,000 schools are connected via satellite and 10,000 via terrestrial technologies.

The 12 channels, Grade 1 to Grade 12, plus three more channels, which offer vocational education, international program and university education, constitute 15 channels broadcasted 24 hour a day from DLTV. The public can also watch the 15 channels live or on-demand via satellite set-top box or the Internet.

In this article, we detail the opportunity of integrating a combination of available Broadcast and Telecom infrastructure, to achieve connectivity and 2-way communication for educational purpose in Thailand.

We will use the Royal Thai Distance Learning Foundation (DLTV) ongoing success and effort, as the main pillar – in combination with:

The infrastructure is designed with emphasis on being a tool, for example as an alternative ways to expedite the handling of submitted questions from the students, so that all questions can be answered in a timely fashion, as a delay in providing feedback in distance learning environments can influence student motivation and drop out.

The scenario in Thailand today

Today the Royal Thai Distance Learning Foundation (DLTV) makes use of satellite infrastructure e.g. Thaicom’s satellite transponder. The satellite signal is received at the schools via a satellite dish connected to a router/set-top box and a TV screen. 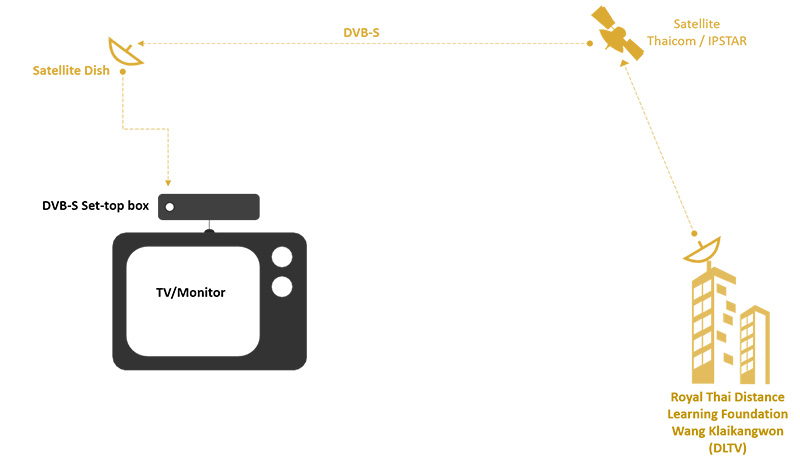 The introduction of terrestrial digital TV in Thailand via the DVB-T2 format provides a new additional broadcast distribution to the existing satellite setup and with it, comes a couple of value features as Digital TV not only provides better quality in images and sound but introduces hybrid usage of broadcast and data distributed together in the same signal.

This opens up for distribution and usage of HbbTV (Hybrid broadcast and broadband TV) interactive services. Such services include on-screen multiple-choice questions, voting, video-on-demand to re-run/request all the content that is already available from DLTV servers, Wiki information (Wikipedia style), educational games, e-books, etc. 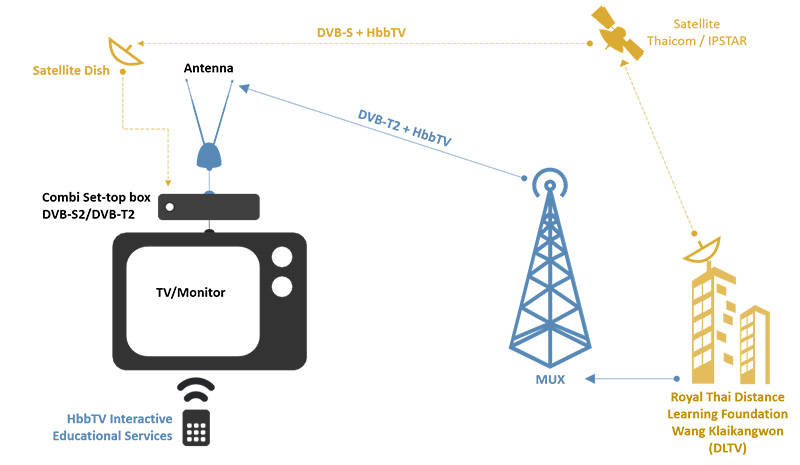 The Smart Classroom of Tomorrow – Today!

By combining the existing distribution via satellite (DVB-S2) with the terrestrial DVB-T2 and HbbTV, the coverage is expanded to more schools, along with interactive options via HbbTV services. However to use the interactive services and to solve the problem of passive learning and introducing 2-way communication, connectivity is required.

The connectivity comes in the form of a SIM card. The infrastructure e.g. mobile network towers, are already available as some of the TOT towers have excessive capacity (underutilized) thus making them perfect as network for 2-way communication infrastructure solution for education, benefitting both the schools/students and telecom operators. 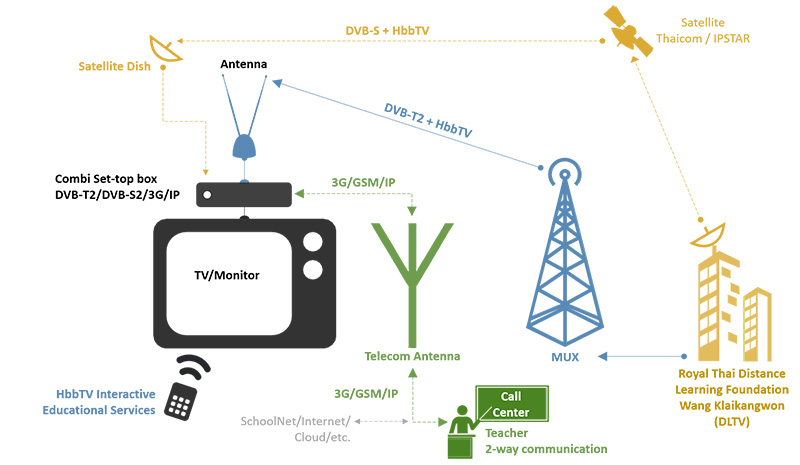 The set-top box is main tool and gateway to the world for the schools and students. It is not your standard TV set-top box for watching entertainment, as this box will serve a higher purpose. To enable this the box will feature:

Parts of this article was originally published in the Computer Engineer Magazine (Thailand), September 2014

How can we help you?

If you have any questions, please fill out the form and a member of our team will get in touch with you. We are always open for talks on how we can add value to your business.

This website uses cookies to improve your experience while you navigate through the website. Out of these, the cookies that are categorized as necessary are stored on your browser as they are essential for the working of basic functionalities of the website. We also use third-party cookies that help us analyze and understand how you use this website. These cookies will be stored in your browser only with your consent. You also have the option to opt-out of these cookies. But opting out of some of these cookies may affect your browsing experience.
Necessary Always Enabled
Necessary cookies are absolutely essential for the website to function properly. This category only includes cookies that ensures basic functionalities and security features of the website. These cookies do not store any personal information.
Non-necessary
Any cookies that may not be particularly necessary for the website to function and is used specifically to collect user personal data via analytics, ads, other embedded contents are termed as non-necessary cookies. It is mandatory to procure user consent prior to running these cookies on your website.
SAVE & ACCEPT